Forced labour affects less than 1% of children living in cocoa-growing regions in Côte d'Ivoire and Ghana.

Studies suggest that forced labour risks are present in the cocoa sector affecting both adults and children, but it is much less common. However, its impact on those involved can be more serious. 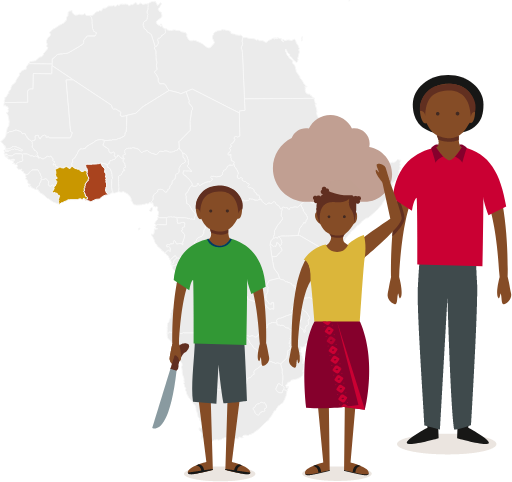 Forced labour is far less prevalent than child labour in the cocoa supply chain, though its impacts can be more serious. According to estimates by the Walk Free Foundation, forced labour affects less than 1% of children in cocoa-growing areas in Cote d’Ivoire and Ghana, and less than 0.4% of adults working in cocoa in these countries

As part of our mission to tackle human rights issues in the cocoa supply chain, we work with our members and partners to identify, address, and prevent the risk of forced labour.

What is forced labour?

Forced labour is defined by the International Labour Organization as "all work or service which is exacted from any person under the threat of a penalty and for which the person has not offered himself or herself voluntarily." Cases can often involve deception and manipulation, such as workers doing work they did not originally agree to or having their identity papers taken from them, in addition to physical violence or its threat.

For children, forced labour is defined as working because of a penalty (or the threat of one) from someone other than the parent. This could be a threat to the child or to the parent. At times children are forced to work because their parents themselves are in forced labour.

What are the risk factors?

Several factors can increase the risk of forced labour: