Cash transfers are increasingly used as a way of addressing poverty across the world. Evidence shows that they can have a positive impact on children’s welfare, improving access to education, nutrition, health and material wellbeing. However, much less is known about their impact on child labour. The International Cocoa Initiative conducted a review of evidence on how cash transfers affect child labour to fill this gap. This research follows a recent study released by ICI on how changes in household income affect child labour. ICI reviewed the impacts of 21 cash transfer programmes across Asia, Africa and Latin America. With agriculture accounting for more than 70% of child labour worldwide, the review focused specifically on impacts of cash transfers in rural contexts. The study was commissioned as part of an innovation project called Targeted Income Support to Vulnerable Households to Reduce Child Labour, in partnership with Nestlé and ECOM, financed by the Swiss State Secretariat for Economic Affairs (SECO).

Cash transfers impact child labour differently, depending on a range of factors

In general, the review found that cash transfers can be successful in decreasing child labour, increasing access to education and increasing households’ resilience to shocks, but the impacts can vary considerably. Some of the programmes reviewed caused unambiguous decreases in child labour, others caused decreased work for some children, but not others, while in others child labour increased. The impact of cash transfers was different for girls and boys, as well as between older and younger children. Impacts also varied depending on a household’s level of income, and the type of work being undertaken by children, be it outside the home, or on family farms or in household enterprises. “The findings are important as they demonstrate the complex impacts of cash transfer programmes on children’s work and the importance of designing such programmes with care,” explains Megan Passey, Head of Knowledge and Learning at ICI. “We know that poverty is one of the root causes of child labour, but the evidence shows that using cash transfers to increase household incomes does not automatically result in reduced child labour – in some contexts, it can cause increases in hazardous work by children.” Examples of situations where child labour increased include when cash transfer amounts were too small to cover school-related costs and when families invested the money into household farms or businesses, requiring additional support from children. In a small number of cases, increased work in agriculture caused children to be more exposed to hazardous activities, such as spraying pesticides or using sharp tools. These findings underline the importance of considering possible negative outcomes in the design of a cash transfer programme, planning measures to mitigate against them from the outset, and conducting robust evaluations to ensure impacts on child labour are captured and better understood.

Access the report: The effect of cash transfers on child labour: A review of evidence from rural contexts.

Read the report summary in French. 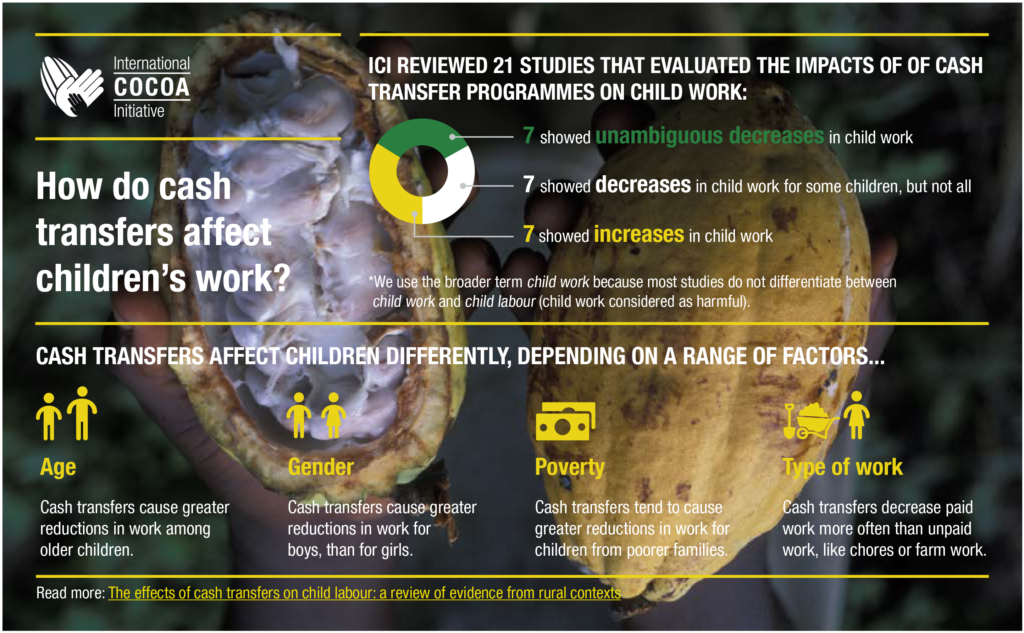 The findings from this study are being used to inform the design of a cash transfer programme for vulnerable cocoa-growing households in Ghana. Within the Targeted Income Support to Vulnerable Households to Reduce Child Labour project, ICI will deliver cash transfers to households at risk of child labour over the course of several months in partnership with Nestlé and ECOM, with funding from Swiss State Secretariat for Economic Affairs (SECO). The impact of cash payments on child labour, child wellbeing and household income will be carefully evaluated to better understand this link and understand whether cash could be a viable option to help address child labour in cocoa-growing communities.